A new contender for the steepest paved road in the UK (or perhaps even in the world if we’re talking Tarmac road) has reared its head after Bamford Clough recently received a pristine layer of  smooth Tarmac up its (unofficial) 36.5 % slopes.  A few contenders for the world’s steepest street/road have popped up over recent years looking to topple New Zealand’s Baldwin Street (34.8 %) in Dunedin so will Bamford Clough be a possible contender?

The maximum gradient of a climb sounds like such a simple concept – the steepest bit of the road, but in reality that is open to a fair bit of interpretation. In July 2019 Ffordd Pen Llech leading up into the Welsh town of Harlech took the steepest road title with a measured max gradient of 37.45 % but their measurement method was called into question by the people of Dunedin who demanded a recount.

At the time, the Guinness World Record criteria was for the steepest 10m of the climb which allowed the inside of the first hairpin of Ffordd Pen Llech to be measured resulting in the 37.45 % gradient.  Baldwin Street however is dead straight so can’t benefit from the extra gradients from the inside of corners.  As cyclists we would never choose to ride up the inside of such a steep hairpin so the max gradient would never be encountered so I would have to agree with Dunedinites on this one.  The re-measurement of Ffordd Pen Llech’s steepest 10m up the centre of the road resulted in a far more leisurely 28.6 % so the crown was handed back to New Zealand.

The Clough heads out of the picturesque Peak District village of Bamford just behind the local primary school and quickly ramps up to 15 %. After 200m you’re already over 20 % and a right fork is taken. At the time of writing there is still a fence across the road at this point (and another near the top) to stop vehicles accessing the road but they can be ridden around without stopping with a little bit of CX skills.

A slight bend and then the worst of the climb is laid out in front of you, dead straight and ramping up into the trees ahead. Given that you are already riding up a 30 % gradient the sight of the steepest section 250m up ahead is quite demoralising!

Combine this with potentially wet, leaf and beechnut strewn Tarmac and the occasional drainage gully to tackle means you need to pick a day when the road is as dry and clean as possible. 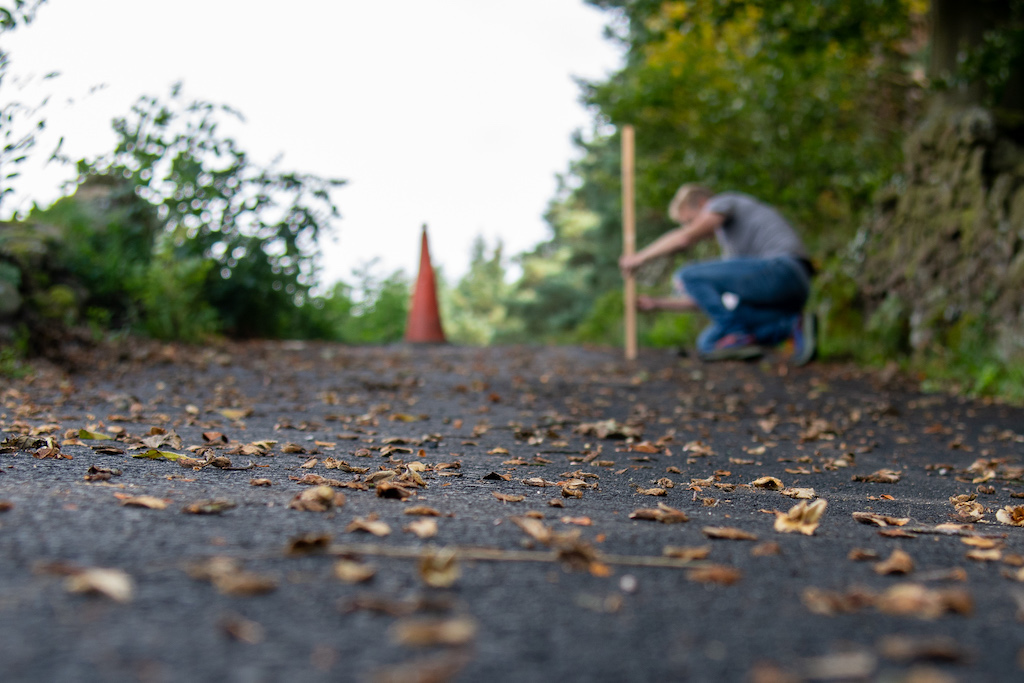 Legs, lungs, heart and traction willing you hit the steepest section fighting to keep the front wheel from looping over your head, sometimes daring to try riding out of the saddle but risking a terminal wheel spin. If you stop here there is zero chance of getting going again.

Fortunately the gradient slackness off markably after the steepest section to a much more manageable 20-25 % and down to 15% to the finish as it joins New Road below Bamford Edge.  Now is the time to lie down, bring your heartrate back down and take in the wonderful views of Hope Valley across to the far more pleasant Winnats Pass.

It appears Bamford Clough used to be cobbled but years of 4WD and motorbike action coupled with rain damage resulted in Bamford Clough eroding through being ridable on an MTB (as this unofficial hill climb video from 2007 shows) to being completely impassable over recent years.  The exposing of a live electric cable saw The Clough closed to all access for a few years while the repair went through the local council processes ending with the repairs being carried out in 2021 with a topping of pristine Tarmac.

Comparison of Bamford Clough with other steep climbs

*  Officially measured over the steepest 10 m in centre of road.

** Unofficially measured by Simon Warren over steepest 1 m in centre of road.

Of course Bamford would require an official measurement to be taken over 10 m which would bring the max gradient down slightly but even then I don’t think it would qualify.  I have the official rules for the record from Guinness and the two things that currently rule out Bamford Clough from the World Record would be the following:

Currently (20th September 2021) the Bamford Clough isn’t open to vehicles. Cyclists can go around the barriers to sample its delights but not sure what the plans are for vehicles.

#2 is the main issue for Bamford Clough. At the very bottom there houses alongside the road but for the steepest 500m there aren’t any buildings at all.

Although Bamford Clough could well be one of the steepest Tarmac road to cycle up in the world (climbs like this one may well be steeper but are on concrete rather than Tarmac), Baldwin Street wins hands down for having houses up its entire length.

You will find max gradients in VeloViewer on all of the segment stats along with in the “Data” tab when viewing an activity details. What you need to bear in mind is that max gradients worked out from GPS device recordings are subject to a fair bit of error.  The raw max gradient would be the steepest section between two recorded GPS points based on the lat/lng positions of each point and the recorded elevation.  The accuracy of those lat/lng points varies depending on the device being used, surrounding topography along with natural or manmade obstacles that might block or reflect GPS signals from the satellites.  Then you have the elevation which can either be calculated using a barometer or via the GPS signal. Barometric is often best but if the weather is wet, the hole for the barometer can become blocked and give bad readings.  If you don’t use a barometric device then Strava will automatically recalculate your elevation based on their crowd-sourced dataset which is actually very, very good for the majority of roads popular with cyclists.

When you combine small variations in lat/lng location with a potentially laggy barometer you can end up with gradients that don’t line up with reality.

Because of all of this the code on VeloViewer will apply an amount of smoothing to the raw elevation data in order to try and minimise the spikes in gradient but although this does a good job of reducing the number of unrealistic max gradients.  Of course the trade-off to this is that sometimes small sections of super-steep road are flattened slightly before being drawn out resulting in a max gradient which is less.

From my work with the professional racing teams they only really want to know the steepest 50m average as this is what will determine the gearing fitted to the bikes. Anything shorter than this they assume the rider can power through. However this piece of  knowledge didn’t help when I was crawling up Bamford Clough!