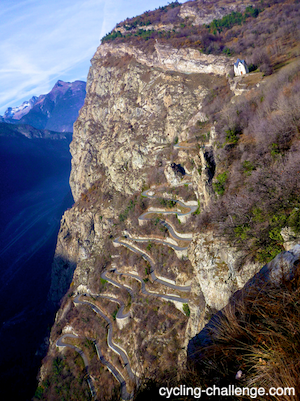 The 2015 Tour de France is set to be one for the climbers (if they all make it through the cobbles) with 12 stages finishing at the top of a hill of some kind and a few more testing mountain stages with descending finishes. The early, classics style climbs will certainly make the initial competition for the yellow jersey more exciting with the puncheurs looking to take the lead, but the main GC battle will be decided on the classic climbs of the Pyrenese and Alps. Checkout some of the key climbs of the race below.

Check out ALL of the 2015 Tour de France climbs and all the climbs of most other professional races on the VeloViewer “Climbs of the Major Professional Races” page.  There you find the embed codes (click on the climb names) which you can easily use to embed these interactive profiles on your own website.

The finishing climb of Flèche Wallonne will be an early test for the GC men attempting not to lose any early seconds to their rivals but the main action will be with the true puncheurs looking to take the yellow jersey off the shoulders of the stage 1 time trial winner. As in this year’s Flèche Wallonne the Mur will be preceded by the Côte de Cherave (1.5km at 7%) just 5km earlier along with the Côte d’Ereffe just 10km before that. The team tactics of a Grand Tour will make this a very different race than the Flèche Wallonne but will we see Alejandro Valverde still take the win? 10% average but 300m of 16+% towards the top.

The racing on the fairly flat stage hugging France’s North coast might well be dominated by the winds but the stage winner will need to be first to the top of this uncategorised climb to the line. Steady in gradient but at over 8% it will be one for the strong men left in the bunch to fight it out.

Not a lot to be gained from the 3D view of this straight climb but the average gradient hides the 500m of 12% in the first half of the climb. All about pacing with the gradient gradually lessening all the way to the line.

With the cobbles, crosswinds, team time trial and first rest day behind them the main GC contenders (or what is left of them) can finally start thinking about the main battle for the yellow jersey, and where better to begin than the Pyrenees. At 167km and only a few, small, category 4 climbs to loosen up the post rest day legs beforehand, the final climb up to La Pierre-Saint-Martin could be a psychological as well as a physical battle with the top guys testing out each others form without wanting to lay all their cards on the table themselves. 9.3km of 9% and a final 1.2km of 8%.

A classic Pyrenean stage with ascents of the Col d’Aspin (1st), Col du Tourmalet and finishing at the top of the 3rd cat climb to Cauterets. A few slightly steep sections midway but the majority of the last 12km of the climb is just below 9%. The current Strava KOM is Laurens ten Dam who averaged just over 20 km/h and 341 Watts for the 51 minutes of his ascent as part of the last mountain stage of the 2014 Tour de France.

Coming at the end of a long, 195km stage with 3 other major climbs for company the Plateau de Beille could well mark the end of a contender’s GC hopes. According to Daniel Friebe (of Mountain High fame) in the Cycling Podcast’s TDF Preview this is the hardest summit finish of the Tour.

The transitional stages across the South of France will not allow anyone to catch their breath with uphill finishes for both stage 13 and stage 14 and a direct (steeper) ascent of the Col de Manse on the loop to the Stage 16 finish at Gap. But it is stage 17 that will see the repeat of the 2015 Critérium du Dauphiné stage in which Romain Bardet took over a minute on the main contenders on the incredibly technical descent from Col d’Allos before holding onto a 36s winning margin crossing the line at Pra-Loup. Expect to see Sky/Movistar attempting to stop Contador and Nibali from getting into a position to make a break for it as they summit the Col d’Allos.

Stage 18 has 7, yes 7 categorised climbs. 3 3rd category, 3 2nd category and the undulating HC Col du Glandon (26km at 4.5% but lots of much steeper ramps). The slaloming descent down from the Glandon has to be one of the most fun things I’ve ever done on a road bike but all the cameras will be focused on the serpentine climb of the Lacets de Montvernier. Also featured in the 2015 Critérium du Dauphiné but almost missed by the TV coverage I’m sure we’ll be getting a far more extensive view of the climb this time around.

The final two “proper” stages of the Tour are both relatively short but pack almost too many punches. Stage 19 finishes up the 1st category climb to La Toussuire that will undoubtably see a great showdown but it will have been preceded by the 1st category Col du Chaussy (15.8km at 6.4%) straight from the gun, the HC Col de la Croix de Fer (21.5km at 7%) and 2nd category Col du Mollard (5.9km a 6.5%) with no flat road in the last 2/3 of the stage.

Final day of GC racing is only 111km and only has 2 climbs. But when the first is heading back over the Col de la Croix de Fer, this time the 28km route from Saint Jean de Maurienne (5.1% but includes 2 short descents) and the second being the final day summit finish on Alp d’Huez then you know it’s going to be spectacular. Even the descent down from the Croix de Fer has some nasty, short climbs to curtail any recovery before a 10km flat dash to the base of the classic 21 hairpined ascent.

Top photo: Thanks to Will (cycling-challenge.com) for allowing the use of the great photo of Les Lacets de Montvernier that features on stage 18.