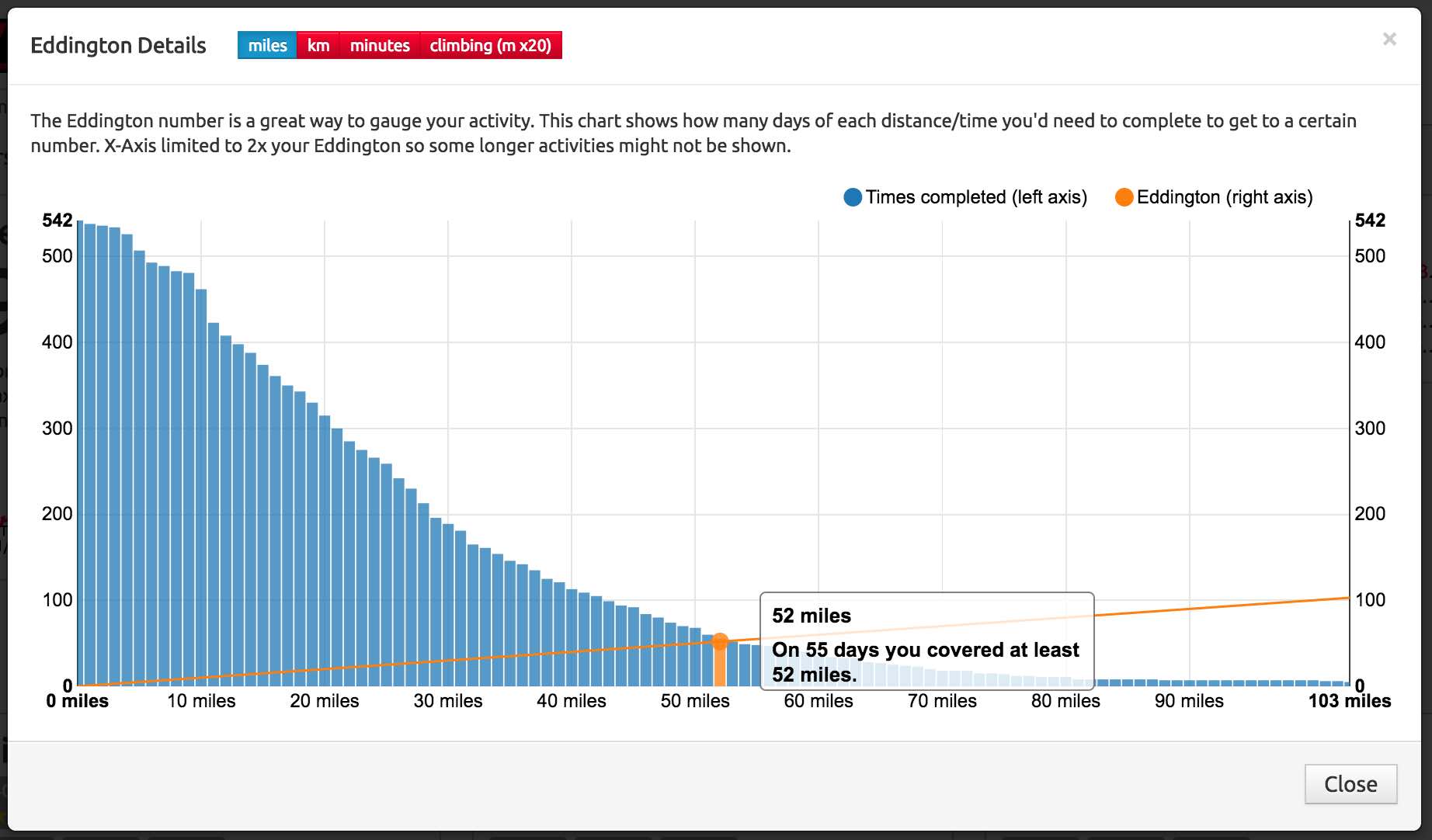 The Eddington number calculation is based on the distance covered per day (not per ride/activity).  You total up the number of days that you have ridden each distance and plot it out (the blue bars) as shown above and your Eddington Number is the largest distance where you’ve completed it that number of times (where the blue bars intersect with the orange Eddington line).  So for me I’ve covered at least 52 miles on 55 days (but I’ve only done 53 miles on 52 days) so my current, all-time Eddington Number is 52.

Why is it in miles?

The Eddington Number is the brainchild of Sir Arthur Stanley Eddington who spent a lot of coming up with numbers related to Astrophysics. Although I’m sure those were all very interesting, his cycling related number is by far the most important to us right now 🙂

Because Arthur was English, and alive between 1882 and 1944, miles were his unit of choice, and as luck would have it this mile based number provides a really tough challenge for the majority of cyclists.

VeloViewer also provides a km based Eddington as well as time and climbing based numbers.  An important bit of maths often misunderstood is that the km based Eddington number isn’t just 1.6x your mile based Eddington.  If I simply converted my mile Eddington of 52 it would be 88km but I haven’t ridden 88km 88 times, I’ve actually only done it just 48 times.  My km Eddington is actually 76.  More head scratching?

The climbing Eddington is based on metres of ascent but with a multiplier of x20 in order to get the amount of climbing in line with the number of days in a more useful way.

Viewing your Eddington Numbers on VeloViewer 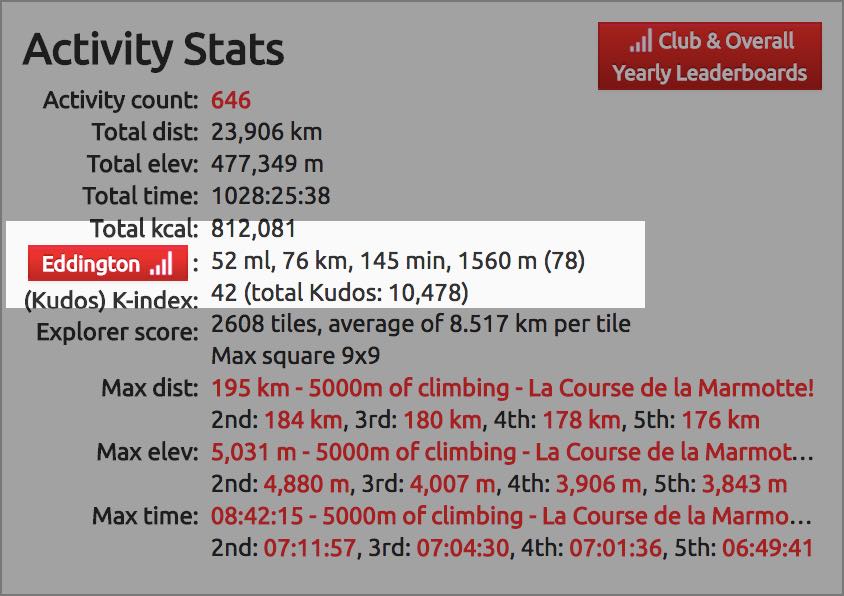 On your VeloViewer Summary page’s Activity Stats section you will see a row called “Eddington”  Here it will show you your mile, km, time and climbing based Eddington Numbers based on the current filters you have selected.  If you pick a single year in the filters then you’ll see the Eddington Numbers for just that years’ activity.

Click the red Eddington button and you’ll get a popup that show the chart shown further up the page.

Simply hover you mouse over the different bars in the chart and the tooltip will let you know how many more rides of a particular distance you’d need to complete in order to reach that number.  So if I wanted to get my Eddington Number up to 60, then I’d need to ride at least 60 miles on 25 more days.  That sounds quite doable. OK then, how about getting an Eddington of 100?  Hmmm, looks like I need to do 100+ mile rides on 93 more occasions to achieve this.  Let’s hope I’m still riding once the kids have left home!

Some Eddington based goals

The great thing about these Eddington Numbers is that they offer a great motivation to all types of rider with your W/kg FTP having very little impact on improving your numbers.

Initially you might just try and increase your all-time Eddington Number but with most people having a large part of their cycling history undocumented on Strava the better metric to look at is a yearly Eddington.  Use the year filter at the top of your Summary page to pick last years’ data and use that as a target to beat for this year.

Also take a look at the yearly leaderboards to see how you compare.  You’ll see that in 2016 we had a number of people get a yearly Eddington Number of 100 (they each rode 100 miles on 100 days throughout 2016)!  A couple of riders actually rode 100 miles on 161 occasions during 2016 as part of a century challenge but as they rarely rode over 100 miles each day then their 2016 Eddington Number was 101.  An incredible effort for all that took part though, especially those with jobs to do as well!

0 thoughts on “Eddington Numbers from your Strava Data”