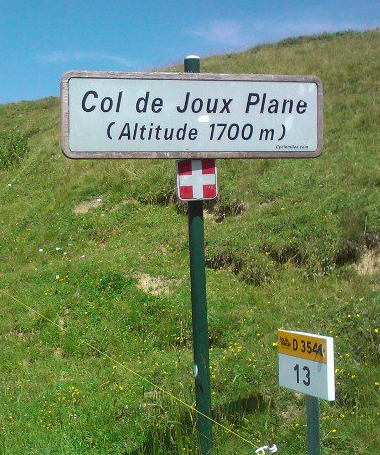 The Etape du Tour is justifiably up there as one of the most prestigious sportives in the world, taking in a stage of the Tour de France just a few days before the race tackles the same roads.  The 2015 route was 138km with 4,400m of climbing but the 2016 route, despite being slightly longer at 146km, looks to have a fair bit less climbing at around 3,500m. But it isn’t all good news, the fearsome Col de Joux Plane, often touted as the hardest of the main cols in the Alps, is saved till the end with just the roller-coaster descent to Morzine to follow. More details on the four climbs of the day below.

After a gentle warm up from Flumet the road actually drops back down slightly before heading along the flat (3km in total) and only then does the climb really gets going again. The final 6.8km average 6.7% with a few short sections of 8%.

The less fearsome side of the Col de la Colombière tends to stay in the 6-7.5% bracket with a few, short, flatter sections bringing down the average gradient. There is a sting in the tail with the final 400m going above 9% which will give your legs a taset of what is to come on the remaining two climbs.

Now things are about to get serious. After the first ramp the road flattens until you reach the small village of Messy. Make sure you take a glance over to the right at the small gap in the cliffs and you will see what is in store for you. From here until you’ve reached the top of that cliff the road just gets steeper and steeper. Fortunately the road takes a safe route across the top section of the cliff by means of a tunnel but this also marks the steepest section of the climb at over 12% (some claim 14%). Unfortunately the climb continues for another 4km after exiting the tunnel with some 10% slopes to finish off.

The tunnel on the Ramaz will most likely be doubling up as a very effective pain cave for many riders but you can bet what is going through most of their minds will be the steeper slopes that still await them on the Joux Plane.  The scene, in 2006, of Floyd Landis’ remarkable TDF comeback but more recently featured in the 2012 Critérium du Dauphiné with a 22 year old Nairo Quintana managing to only just pull away from a strong Team Sky and yellow jerseyed Bradley Wiggins. The gradient never relents but the numerous 12% ramps sap the energy and keep you from being able to find a good rhythm. The final 5km just goes on and on, never really changing from 9% with the summit appearing tantalisingly close but never seeming to get any nearer.

Take care on the descent to Morzine. The road is, at the time of writing, still closed due to a landslide but easily passable by bike. This is the descent where Sean Kelly achieved his fastest ever speed of 121km/h but probably best to not attempt to emulate that. Great fun but fairly technical with a number of areas of poor road surface.