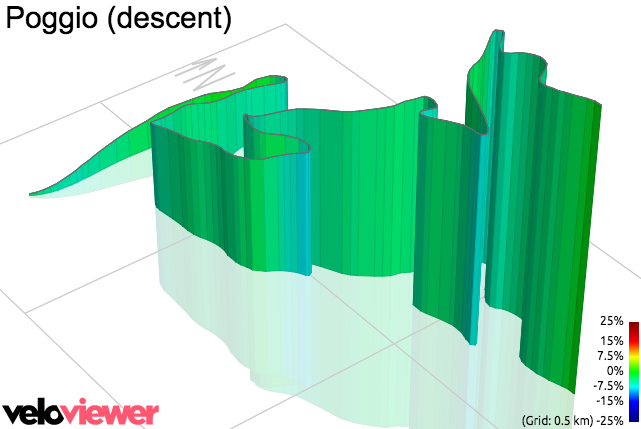 At 293 km the Milan – San Remo is the longest one-day race for the Pro peloton and has one of the most climactic and open finishes of any of the races. With two short (and not actually that steep) climbs in the last 30 km you see all types of rider attempting to make winning moves. Climbers on the way up, the Rouleurs on the way down and the Sprinters in the last 200 m. Which of those will end up being the move of the day will be anyone’s guess. Here we will have a look at those three sections of the route that will decide the race: the climbs of the Cipressa and the Poggio along with the plummeting descent down to the finish in San Remo.

5.6 km with an average of 4% and maximum of only around 7% this action for this climb starts from around 10km out from its first slopes with the teams fighting for position for the sharp right turn and the narrow, twisty climb. Lars Petter Nordhaug’s Strava KOM is from the 2014 race (where he finished 15th overall in the leading group) took just under 11 minutes to climb the Cipressa but with an average speed of 31.3 km/h (19.5 mph).

If you thought the run in to the Cipressa was crazy then you’ve not seen anything yet. With the sprinters using the descent from the Cipressa and the 5 km of coast road to make their way back to the front of the bunch, what remains of the peloton will swing up the starting ramp of the Poggio at 50 km/h (30 mph). Nordhaug (although slightly off the KOM this time) managed to average 32.6 km/h (20.3 mph) up the 3.6 km ascent (average of 3.7%).

With the 2015 finish being that much closer to the base of the Poggio’s descent then there is a real opportunity for someone to attempt to emulate Sean Kelly’s infamous 1992 win when he literally flew down the Poggio, dropping the rest of the group and catching Moreno Argentin at its base before easily out sprinting the Italian to take the spoils. Expect some IOM TT type moto footage with shoulders and helmets skimming the stone walls as they swing round the blind corners. The Strava leaderboard for this descent looks to be filled with Virtual Reality trainer rides so don’t give them too much attention.

The majority of the race can be like watching a game of cricket (although sometimes with snow to liven it up) with all the excitement saved for the last 3/4 of an hour.  Definitely try and tune in on the run in to the Cipressa from around 4pm CET (3pm GMT). As with most bike races these days it clashes horribly with my kids swimming lessons so I’ll be on media blackout until I get chance to watch the the highlights!