Some of you may have read my previous post about my use over the winter months of a coach for some structured training to see how effective it really is.  This is my first experience with proper training having previously just free-style “trained” by trying to beast myself on Strava hill segments.  The goal of my training was the Strade Bianche Gran Fondo in early march which unfortunately ended with a puncture and a near hypothermic brother which combined to result in a DNF at around the halfway mark, but the more measurable gains had already been recorded – at 12% increase in FTP.

Total days on the bike: 90 (see them listed here) 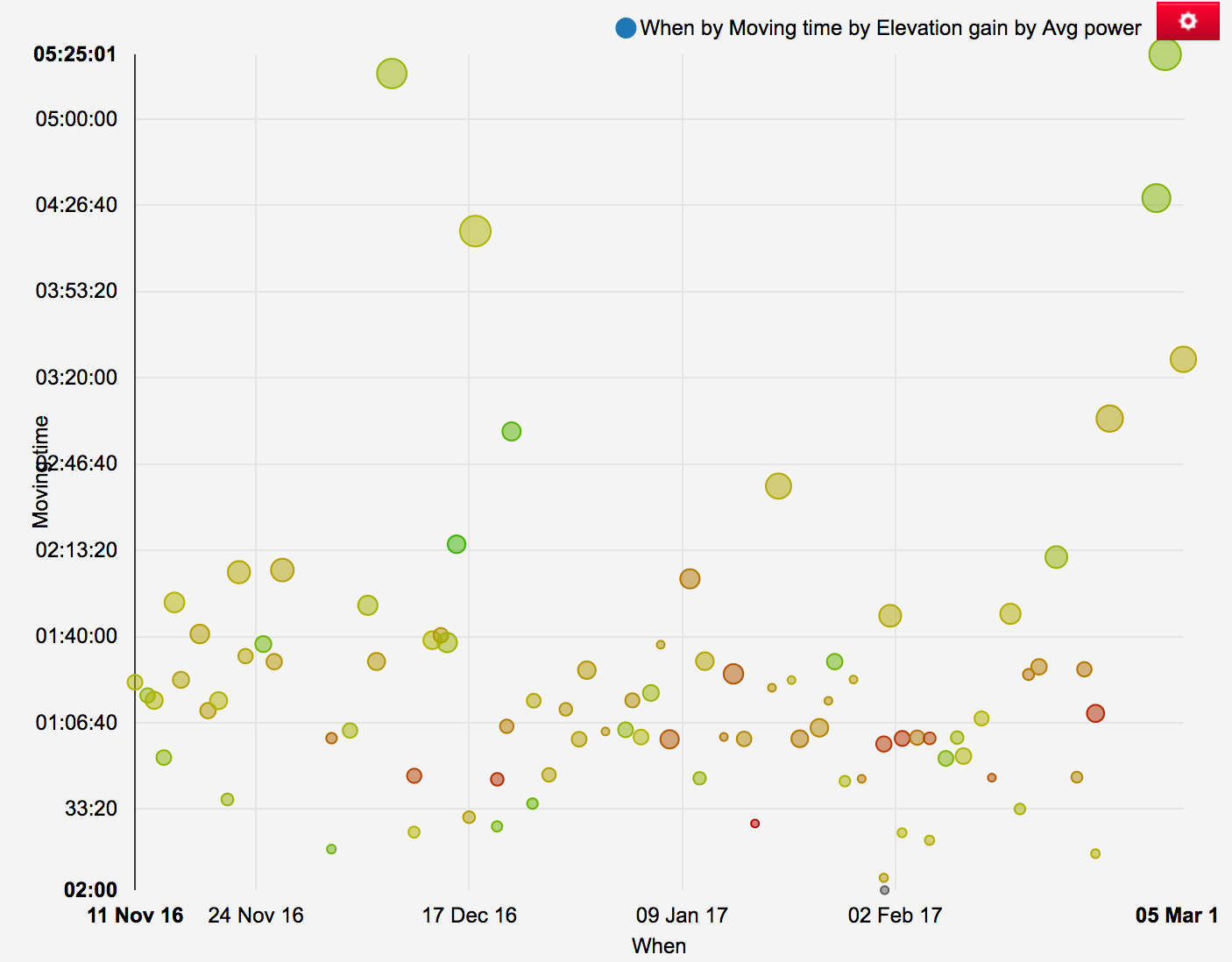 I really was trying to squeeze in all of the workouts prescribed by Philipp around family life and work which meant lots of short, very structured sessions using the Kickr’s ERG mode in the garage.

Enough from me, over to Philipp for his analysis of my stats… 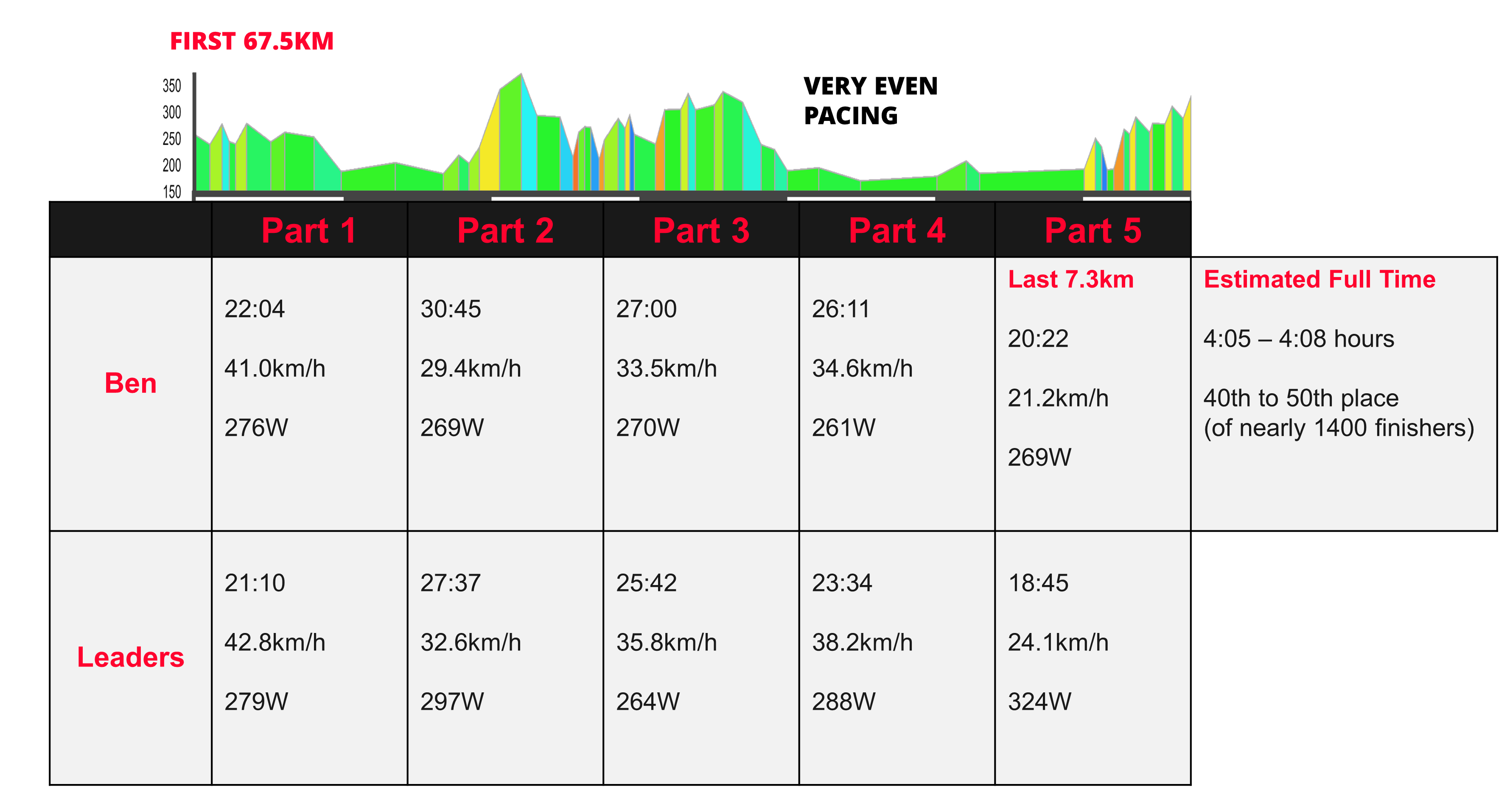 If you compare his sector times to the fastest guys out on course, he was forfeiting 90-120s every 15km. Suspecting he would have been able to roughly keep the tempo for the last 55-60km, a time of 4:05 to 4:10 hours would have been realistic – for a result around 30th to 40th place. Note that this depends getting into a quick group and having ideal conditions.

What is physiologically possible for Ben?

PD: Ben obviously has the potential to ride a bike fast! If he keeps training consistently and maybe increases volume from time to time – implementing a 5 hour plus long ride every other week – he would most likely be able to crack the magic 5W/kg mark at some point. I would like to see him try. Ben’s FTP test on 12th of February is a great indicator of what he has been able to achieve in just 3 months of structured, dedicated training: 367W. A result he was able confirm in several training sessions after, for example 4 times 8 minutes at up to 360W and a fantastic 8min effort at 5,03W/kg in a Zwift race on February 23rd.

BL: I’m really surprised how effective having a coach was, having the sessions set out for you combined with knowing that someone is going to review what you’ve done provides more than enough impetus to knuckle down and do all of the sessions. Combine that with a power meter and a smart trainer and there really is nowhere to hide from the work.  It did mean feeling pretty much ruined for a full 4 months but that might be more to do with my 40+ years!

Having a turbo bike (an old commute bike) permanently set up in the garage for the whole time was a huge help as I could be starting the session within minutes of getting the kids into bed and finished in time for a Nordic Noir murder mystery with the wife.

Zwift races provided some great motivation and some of my highest heart rates of the winter and are definitely worth checking out.

Mrs L was inspired enough by my experience and improvement that she has now signed up with Philipp for her own training schedule.

Will I continue with training? Despite enjoying the process and seeing the improved numbers I don’t actually enjoying racing at all so without any real goals for training I don’t have the motivation for carrying on with it at the moment. However if I was ever to feel the urge to pin a number on again in the future then I’d be sure to sign up with Philipp again to get me in the best shape and would recommend a similar approach to anyone in that same position.

0 thoughts on “Turns out having a coach helps, a lot!”