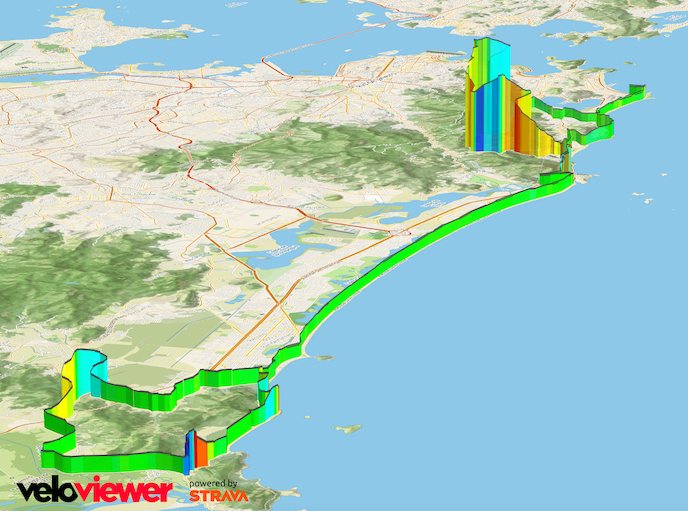 The Rio Olympics’ road cycling events are set to be a real opportunity for the climbers with gradients approaching 20% on both the road race and time trial courses.  I suppose the sprinters have got the World Road Race Championships in Doha to look forward to this year! (Update: now also includes triathlon bike loop)

The road race is made up of two circuits. The first is the same as that used for the time trial and includes a very steep climb (up to 20%) with a technical, twisty descent followed by a much more manageable climb of mostly 7%.  The 2nd loop contains a climb to just over 500m made up of two parts. The first part having the steepest ramps of up to 15%.  Another very technical descent awaits, again with thick tree cover and the resulting issues with flicking between sunshine and dark shadows.

The finish is 9.6km of flat road from the foot of the final descent on the beachfront of Copacabana (if my sources for the route are correct!).

4 laps of the initial circuit followed by 3 laps of the bigger climbs result in an elevation gain of 3,690m over the 236.7km.

2 laps of the time trial circuit followed by a single smash up the main climb will make for a much more explosive race than the attritional men’s race with the women having just the one real opportunity to make the split and hang on for the final 9.6km of flat roads to the finish. 1,591m of climbing over 136.1km.

Already tackled during the road race, the time trial circuit includes the horribly steep (20%) climb and tricky descent, but this time on TT bikes. The descent from the 2nd climb is far less technical being on a wider road with more sweeping corners.

2 laps of the circuit for the men provides 700m of climbing over the 54.3km.  The profile shows what a tough, interval session this course will provide with pacing being key to save enough power for the 2nd loop.

A single lap for the women means each of the climbs needs to be attacked hard given the recovery on the descent after the final climb should leave enough for the final 8km of flat to the finish.