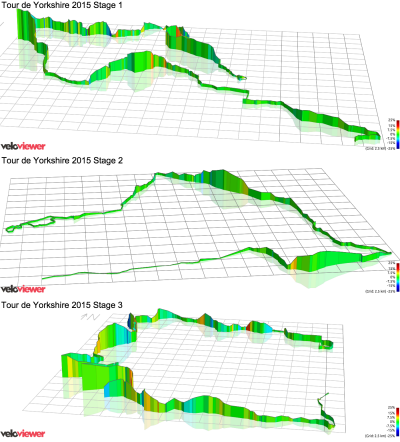 If you want to get that e-mail in your inbox letting you know that Laurens Ten Damm has stolen your KOM then these are the hills on the 3 stage Tour of Yorkshire you have to bag before May 1st!

Diverting through the Dalby Forest, a great place for mountain biking, the route has one minute little ramp in it but it’s neither long enough, steep enough or well placed enough to cause any damage. At just 600m long I’m sure there’s something in the trade description act that should prevent this being labelled a Côte.

Alas, this isn’t Rosedale Chimney which of course is a massive opportunity missed, maybe next year they will send the race over it’s 33% slopes. All the Côte de Rosedale Abbey has in common with its famous namesake is that it passes its base where the riders will get a good view of it as they trundle up the 3km of 7% climbing to the highpoint of the day.

Otherwise known as Sleights Moor, well at least it would be if they went all the way to the top of the Moor and didn’t turn left 100 metres into the climb. This Côte is more of a short sharp bump rising up, through and out of Grosmont. I can imagine the great Côtes of France will be livid, massing at the Channel when they hear that 0.4km of tarmac can carry the same moniker as their giant slopes.

File under not significant enough to discuss. Of course now I have written that the entire race will hinge around what happens here so get there early to bag the best seat in the house.

This is the big one of the day, if 1.5km constitutes big for the world’s best riders. Set on a 10% average slope we can only hope the crowd give the riders plenty of room to strut their stuff and let the attacks rip up this vicious slope, the final climb before the run in to the pan flat finish in Scarborough.

I used to ride this nearly once a week while I was at University in Hull, usually on a Wednesday afternoon, hungover from a late night’s dancing at Stiletto’s night club the night before. Let’s face it, it’s no giant, in fact at 1.5km and just 5.3% average the pro’s will big ring it, destroying the local riders KOM’s on the way.

On the official profile this looks like Mont Ventoux which is a slight exaggeration. I’ve never been here mind, in fact has anyone? Wait a minute, there used to be a road race out at Wetwang, just down the road, I rode that once, maybe I have ridden it, but if I did it was over 20 years ago and I have forgotten all about it.

Holme Moss you cry! Yes! No. Sorry, just the Côte of Holmfirth, it’s the other way out of town heading north and it won’t cause too many ripples in the bunch as it’s very early and they will still be digesting their breakfasts.

Here is where the day’s fun begins, too early to be decisive, much to early, but 2km at over 8% will make a few riders sweat, and if a team has a sprinter in the leaders jersey they will really have to nurse them over this if they want to get him to the finish in one piece.

Known to the locals as Cock Hill, no really, look at the map, this was ridden the opposite way in last year’s Tour de France, (it’s still crazy saying that). It’s a proper grind out of Hebden Bridge and by far the longest climb of the day at 4km up to the top of Oxenhope Moor where in May the weather probably won’t be as kind as it was on that glorious day last July.

A wicked little climb, a savage ramp of 20% tarmac that will hopefully have all but the very strongest begging for mercy as their tired legs, worn down by the constant up and down begin to seize up.

Rising from the heart of Ilkley the Cote de Cow and Calf is a local favourite with its 17% slopes, stunning rocky landscape and of course the Cow and Calf Inn at the top (Book your table now). This, although not close to the finish, looks like it will be the vantage point of the day and the best spot for that killer photo.

There used to be a hill climb up Chevin Bank out of Otley, but it was moved because the road got too busy. This dead straight unforgiving rise is a brute, but, alas the route veers left halfway up mind, to limit the damage.

This isn’t even flagged up on the route map, well it is, but there is a sprint at the top, for me this could decide the stage and for that matter the race. A 1.5km 8% slog which bends gradually left so the brow is constantly hidden will I hope, be the launch pad for a heroic all or nothing bid for glory.

See all your cycling rides in their full 3D glory (and much, much more) at VeloViewer.