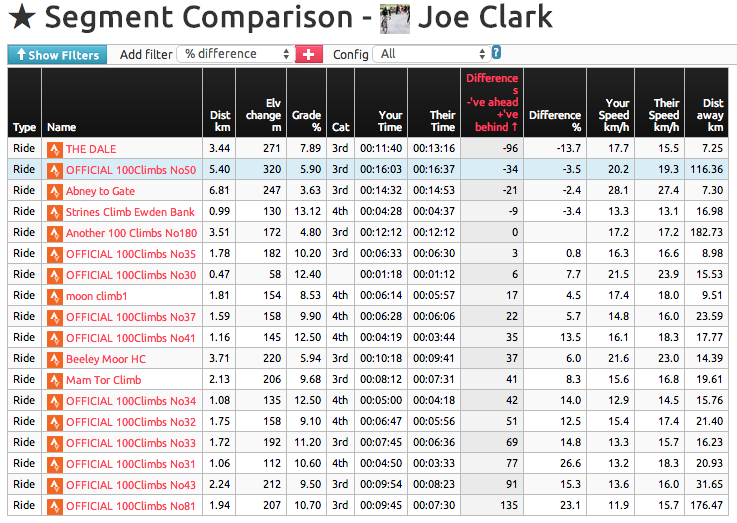 Note: Unfortunately the Rivals and Comparison pages had to be taken down in May 2018 due to GDPR and the knock-on changes to the Strava API. More info here.

First up, the Rivals page has been updated so that every athlete listed now has a direct link to the comparison page even if they are not on VeloViewer. The Friends list has also been extended so that it now includes all of your friends with only those on VeloViewer showing scores.

Click any of those compare links and the comparison page will load up and will display one of two things:

Here is a starred segment comparison between myself and Joe Clark (who is clearly much faster than me): 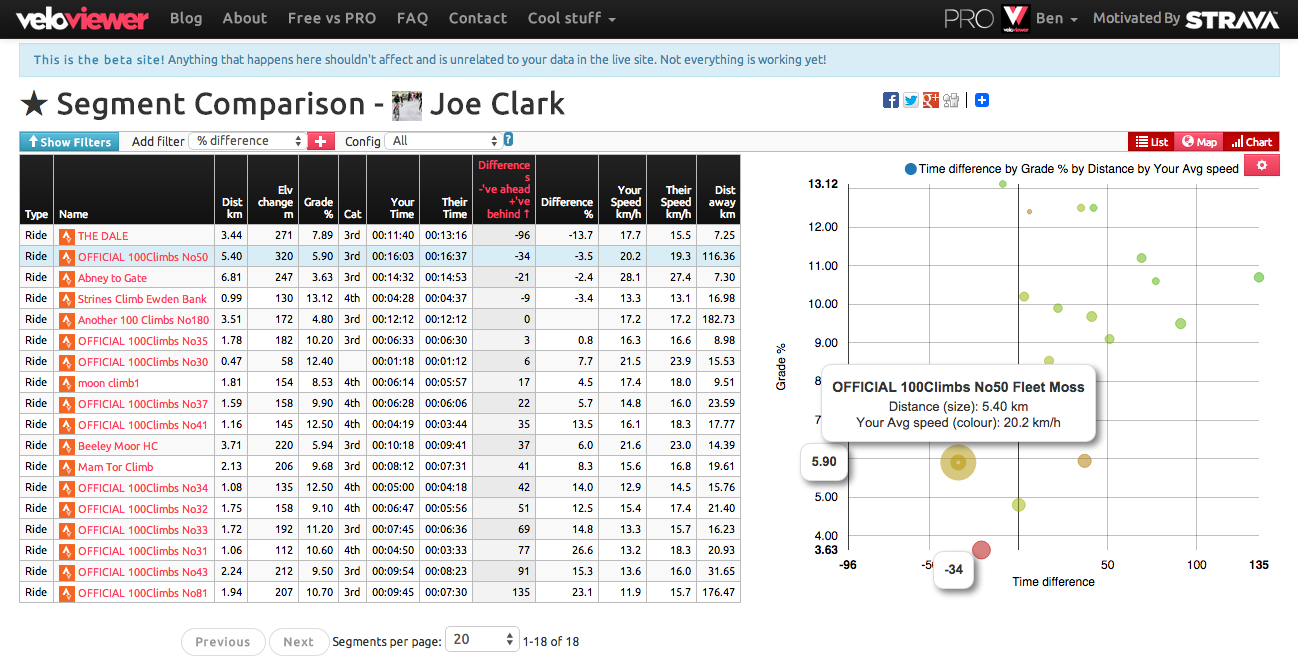 I’m currently looking into easy ways for you to deep dive into this comparison page from Strava but for the time being the only direct links you’ll have are those in your Rivals page.  For the slightly more tech-savvy out there you’ll easily notice that the Strava number for the athlete you are comparing is in the page’s URL so you can just swap that out for any other Strava athlete’s number and hey-presto, there you have it.  These are easy to find by clicking on any other athlete’s name in the Strava website – this will take you to that user’s profile and their number is in the URL.

Why just the starred segments? In order to generate the comparison the page checks for the best effort for the other athlete against each of the segments via a Strava API call so attempting to check all of your segments is a complete non-starter as many people have 1000’s of segments!  The starred segments in Strava may well serve some other purposes for some people but in general it is used for marking out the best or most important segment to you. The more people that use the starred segments in this way then the better Strava’s algorithms can get around hiding annoying duplicate segments and providing segments searching.

Let me know if you’ve any issues or ideas for this new comparison page.

Background on the Beta site

The existence of the beta site might be news to some people so here is a little background as to why it is there and what it is doing differently:

In order to store the data in the new structure it involves an initial reload of your activities on the beta sites Update page but all the segment placing are migrated across.

The plan is that once I’ve moved all of the functionality across to run off of the new data model then I’ll make the switch of the functionality over to the live site so free users can also get the performance improvements. As far as I’m aware the only page left for me to convert is the signature image.  So if you haven’t done so already then have a go on the beta site and get your data migrated over as that will lessen the burden on the Strava API rate limits when I make the switch.