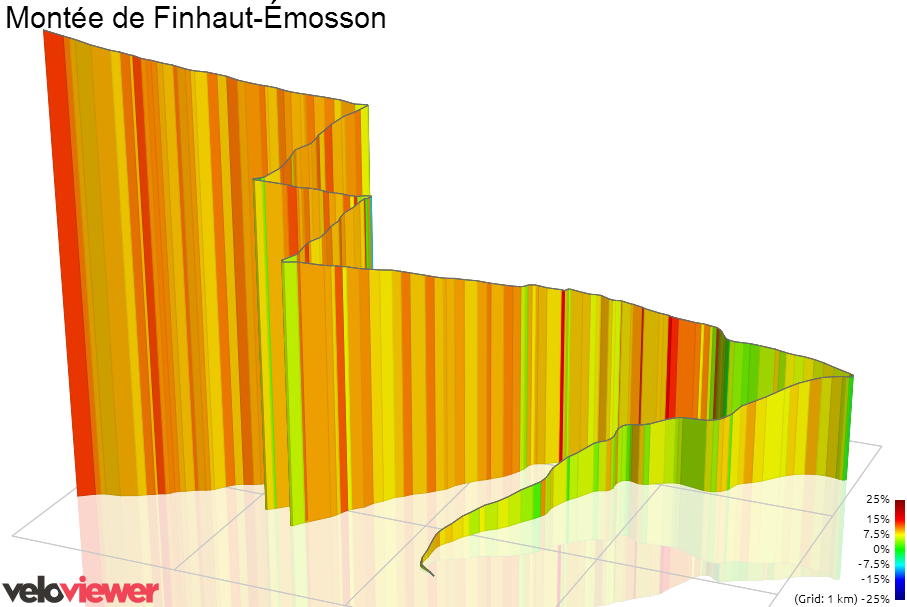 One of my favourite races of the Pro Cycling calendar, the Critérium du Dauphiné.  Named after the Dauphiné province in south-eastern France’s high mountains this race is always packed with the top Tour de France contenders performing their last major competition prior to the Grand Depart. Next time we’ll see this top class field it will be on the streets of Yorkshire!  Taking in many of the famous climbs of the Alps with 3 mountain top finishes this year’s race will be a great warm up for the spectators as well as the riders.

The first stage in Lyon is a short, 10 km time trial with just a single, twisting hill to break the riders rhythm. Not only is the way up going to test the riders but the hair-pinned descent will also require some good bike handling skills on the twitchy time trial machines.

Not even a kilometre long at just 6.5 % the Montée de l’Observance is more of a sprint than a climb.

No hanging around in this race, stage 2 gets the race properly under way with a finish on top of the HC (Hors catégorie) Col du Béal.  At just over 13 km at 6.5% this climb may well decide the overall podium and for a team like Sky they may be looking for the week in yellow to hone their skills of controlling the race for Froome in preparation for the Tour.

Following the long and undulating stage 3 (which doesn’t include any major climbs) stage 4 heads back towards the edge of the Alps to finish in Gap, the sunniest city in France. Passing within site of the finish the riders will have to head up the 2nd category Col de Manse before plunging back down to the finish.

6 categorised climbs stand between the riders and the finish in La Mure but with the hardest being only 2nd category climbs you’d expect the race to stay pretty much together.  Then again, given enough pressure from the teams of the yellow jersey’s rivals then the leaders team may well struggle to hold the group together.  The final two, 2nd category climbs of Col de la Morte and the Côte de Laffrey come within 40 km of the finish but don’t look to pose too much of a threat.

The climb to the Col de la Morte is just over 3 km in length but the snaking descent down to the valley below makes for a far pretty 3D profile!

6.3 km in length, the Côte de Laffrey leads the peloton to an undulating last 20 km to the finish.

Stage 6 will be a stage for the hopeful breakaway but stage 7 sees the race head back into the real mountains with two 2nd Cat climbs, one 1st Cat and finishing off with a double whammy of HC climbs.

After the warm up climbs of the fantastic Portes du Soleil region the riders drop down into Switzerland and head up out of Martigny to the Col de la Forclaz – 12.6 km at over 8 %.

After a short descent the road will take the riders up the dramatic ascent to Lac d’Émosson. This final 10 km at 8 % isn’t the final climb of the race but might be the last chance for the GC riders to make much time on their rivals.

Not a flat start to the final stage by any means with a 2nd Cat closely followed by a 1st Cat climb in the first 50 km but then things should settle down before the final showdown up to Courchevel.

Leaving the Alpine service town of Moûtiers in the valley below the climb to the Côte de Montagny average gradient of 6.5 % is slightly misleading as following the initial pull out of the valley floor the gradient slackens considerably before ramping back up for the 2nd half of the climb.

No flat stage to finish off this race, it’s time to leave everything you’ve got on the road on this final ascent to the luxery ski resort of Courchevel. At only just over 6 % and consistent throughout this isn’t going allow for many fireworks but with tired legs all round who knows what will happen?