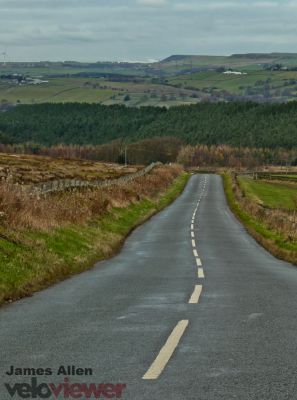 The final 40km of stage 2 of Le Tour is likely to be action packed. The terrain will see to it that attacks will come and the cream of the world’s professional cyclists will emerge at the front to do battle until the finish in Sheffield. The roads here are largely within the Strines region which cyclists from Yorkshire and the Peak District know very well. Many local pros, past and present, have utilised the repeated steep climbs in the area to hone their racing fitness. The Strines Road itself is a notoriously steep stretch of tarmac which begins at the A616 at Midhopestones and terminates at the A57 after 15 rollercoaster kilometres. The Tour riders won’t cover the full length but they will tackle the most severe sections before turning off east towards High Bradfield and further sharp ascents on the approach to Sheffield.

The first climb comes immediately as you turn off the A616 at the village of Midhopestones. The Tour de France organisers have named it ‘Le Cote de Midhopestones’ and the gradient begins around 9%, increasing to 12% over a sustained kilometre through the hedgerows. Towards the top it reaches15% before descending briefly, then continuing to a more open landscape. The incline here is much easier at around 5% for a further kilometre, but strong winds could make life more difficult for the pros. 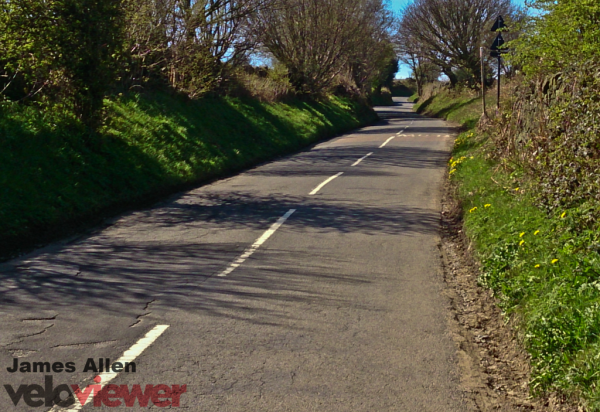 Keep your eyes peeled for an old toll house at the bottom of ‘Le Cote de Midhopestones’. In fact the Strines Road was once a toll (or turnpike) road. It’s actually called Mortimer Road, named after Hans Wilthrop Mortimer, who built the road in 1777 to link Grindleford to the important market town of Penistone. So steep are some sections that extra horses were often needed to pull stagecoaches. These horses were chained at the bottom then unhitched at ‘Take off’ stones that can still be found at the top of a few of the steepest parts. You will fully appreciate this need for extra ‘horsepower’ if you ride your bike here.

Of course the world’s best riders have the engines to make relatively light work of these climbs on any normal day, but under competitive conditions it’s predicted that this terrain could make the racing ‘explosive’. This was the recent analysis of Merijn Zeeman of Belkin Pro Cycling Team following a recce of the stage 2 route. This steep and twisting terrain in the final 40km is perfect territory for repeat attacks, whilst the drags along the moorland roads are ideal for strong teams to maintain the pressure and string out the bunch. Coincidently the moors have an explosive past as a live-fire training area during World War 2 and live munitions were recently exposed following a bout of heavy rain. 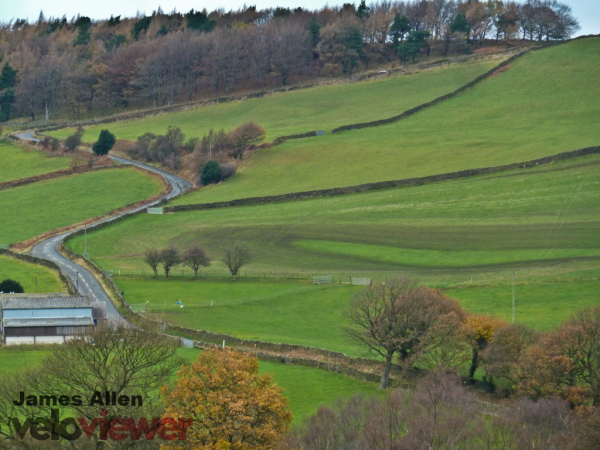 After summiting Le Cote de Midhopestones there is an infamously abrupt descent to Ewden Beck. This hill is known as ‘Deliverance’ and the tour riders will have to be alert here. In 2006 it was used for the Tour of Britain and even local pro Russell Downing misjudged the descent on this occasion. Tom Boonen, in his World Champion Rainbow Jersey, also crashed and was seen getting treatment from the medic’s car on the climb back up from Ewden Beck. The technical difficulty arises because the gradient quickly, but subtly steepens from 15% to 23% just before a hairpin right-hand bend. This bend is also off-camber whilst the exit has a natural spring coursing through the tarmac so it’s permanently damp under the tree cover. The Tour de France peleton will also be nervous in these early stages of the race and most riders will be relatively fresh. As a result there may be a large number of riders plunging down here with many desperate to keep to the front on these narrow and tricky lanes. Fingers crossed they will all reach Ewden Beck at the bottom safely.

The climb up from Ewden Beck is not named as a climb in the Tour itinerary but it’s certainly a real test. The first 100m ramps towards 20% then becomes more gradual over 2km until the turn east to High Bradfield. This climb may surprise some of the pros and it is surprisingly tough, but for amateurs it’s still a joy to ride around here because the traffic is light and the scenery is magnificent. Its a popular cyclist’s playground so if you fancy a taste of these ascents, Sheffrec CC organise a sportive ride in late summer known as ‘The Strines Challenge’ which condenses 2500m of steep climbing into just 88km. 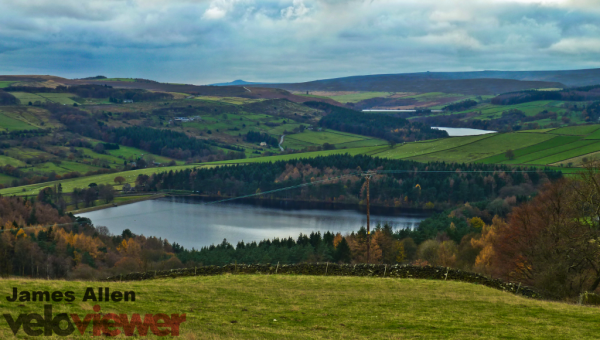 After leaving the Strines Road, the route towards High Bradfield rolls across the hillside for a while. This is where a strong team could well push the pace on July 6th to consolidate splits in the peleton following the previous climbs. The road offers superb views across three reservoirs including Dale Dyke which infamously breached in 1864 killing 238 people in the Sheffield flood. The landscape is now serene and after a short descent you reach the small village of High Bradfield where Saint Nicholas church stands proudly on the hillside. There is also a Mott and Bailey Norman castle slightly hidden just above the village, but the tour riders won’t notice as they hurtle around the tight corner through the village. They will immediately begin the next climb of ‘Le Cote de Bradfield‘ to Kirk Edge road 100 vertical metres above, beginning with a tight left-hand bend. The road steepens to 20% initially then levels to a steadier climb to the ridge beyond. The gradient hovers around 8-12% for much of its 800m length but considering the nature of the route so far, many of the tour riders will be battling to keep up.

The next descent into the village of Oughtibridge is another technical section with narrow roads, sharp 90 degree bends and undulating gradients. The tour riders will have to be vigilant yet again until they reach the River Don and the foot of the penultimate named climb of the stage, ‘Le Cote d’Oughtibridge’, which climbs the hillside to the village of Grenoside. This climb is well-known locally as ‘Jawbone Hill’ because the actual jawbones of a whale once spanned the road to commemorate the end of the Napoleonic Wars. 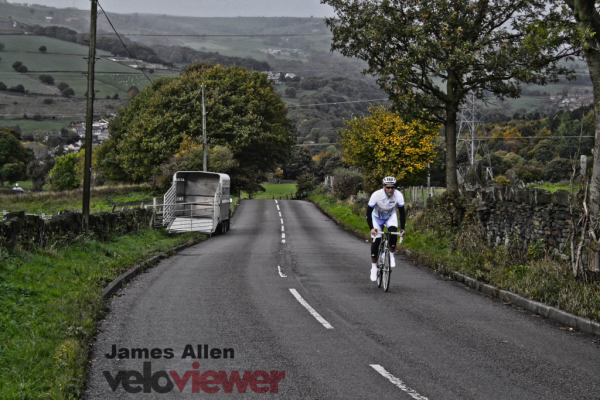 Le Cote d’Oughtibridge ascends 162m in around 1.8km so has an average gradient of 9%. However, the first section is the hardest. The early slope hovers around 11% until your reach a bridge crossing a railway where there is a fairly sustained ramp reaching 15%. The slope returns to 11% as you pass some small industrial buildings and Wharncliffe Woods where local downhill mountain biking legend, Steve Peat, spent his formative years. This is the place where a plucky rider might make his move for Tour de France glory with only 20km of the stage remaining. It’s also likely that a few more riders will be dropped from the progressively thinning front group with only one more named climb left before the finish.

The second half of the ‘Jawbone’ takes you onto the open hillside where, except for a short 13% ramp, the gradient is more forgiving. The summit can be seen high above at Birley Edge. The road steepens for a final push to the top where the Birley Stone stands prominently and is believed to have remained, perhaps as a boundary marker, since 1161. It’s an indication that this spot has attracted people for centuries. The views are certainly spectacular across the green city of Sheffield where there are allegedly four times more trees than people.

Once the road squeezes past the Birley Stone the pros will begin a 5km descent then a lumpy 10km transition through the outskirts of Sheffield until they reach Le Cote de Jenkin Road. This will be the final test of the day but there are sure to be sore legs considering the challenges encountered through the Strines region. Whoever wins the stage will need to be a good bike handler, a talented ‘puncheur’ and he may also need a little bit of luck along the way. Nevertheless there is no doubt that whoever raises their arms in Sheffield will be a very worthy winner.

James Allen has spent far too many hours riding the fantastic roads of Strines over the years but given his hill climbing achievements this is obviously a perfect place to train. Read more about the climbs of Strines and discover many others across Yorkshire and Peak District in his excellent book “50 Classic Cycle Climbs: Yorkshire & Peak District”.