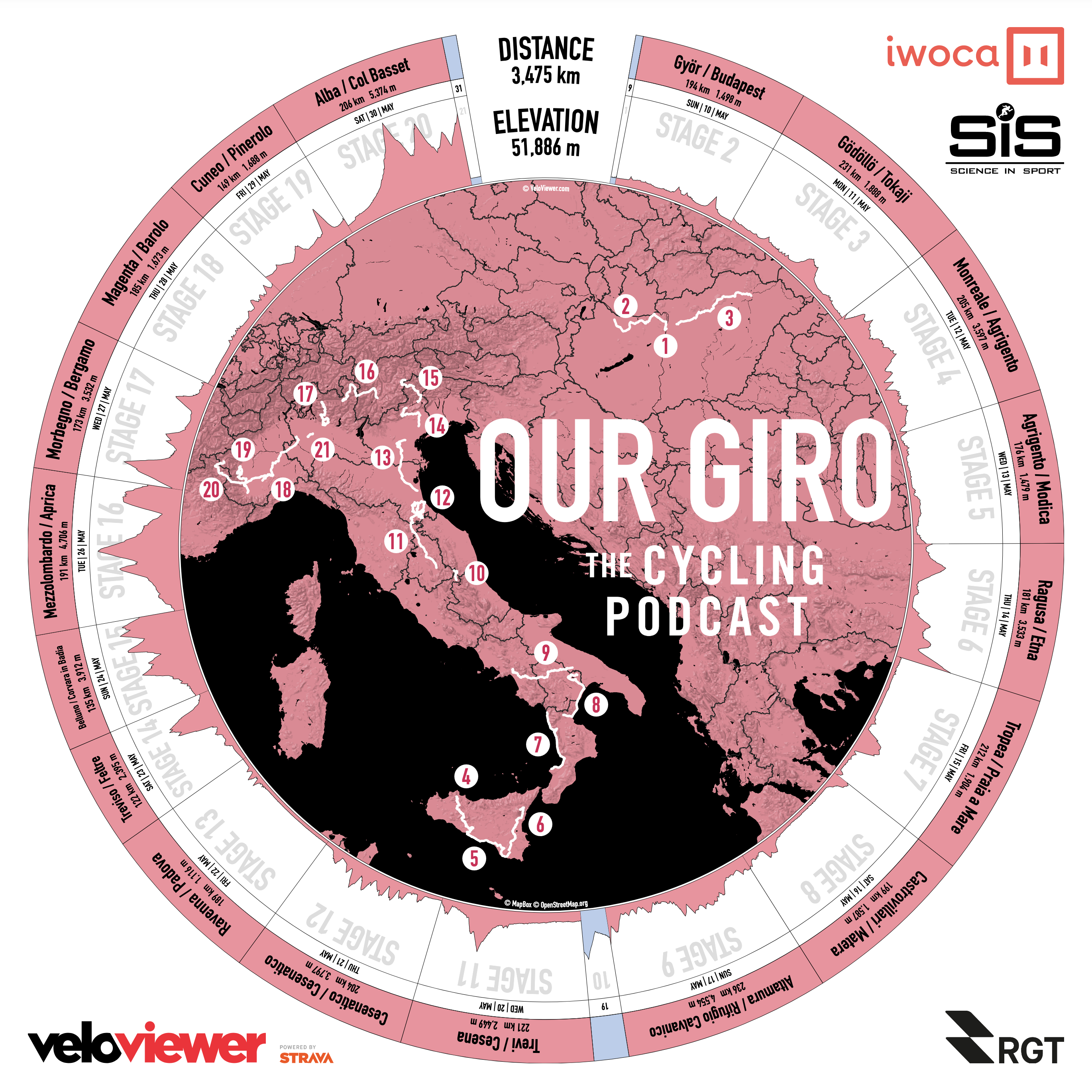 The Cycling Podcast needs no introduction, I’ve listened to them for years and always enjoyed their daily coverage from the Grand Tours. Undeterred by the lack of a race to cover, Richard, Lionel and Daniel have created their own Giro taking in the best wines and foods Italy has to offer, as well as some of the most iconic climbs.  Race director Friebe got in touch a few weeks back to help him come up with the route and when he mentioned that they hoped to offer their listeners the opportunity to ride key sections of each stage I hooked him up with the guys at RGT.  From the short, intense 8.4 km prologue through to 47.8 km rolling route through Piedmont a different challenge awaits each day with routes using the RGT “Magic Roads” feature.  From this Saturday (9th May 2020) join the official group ride or ride them at your own leisure to try and complete your own “Grandy” with the Classifica Generale available for you all on VeloViewer. Best of all, it is all free!

The Cycling Podcast and RGT have far better marketing departments than me so I’ll just post links to their pages which will tell you how to get set up and join in:

Each stage will be available to ride in RGT from 9am (UK time) each day and remain available for 3 days.
To keep track of your progress and to see how you stack up against Lionel, Richard, me and the other Cycling Podcast listeners upload your times each day to both the GC (Classifica Generale) and the mountain jersey (Gran Premio della Montagna):

The Gran Premio della Montagna will be made up of a select few of the toughest climbs over the 3 weeks.

So what are you in for if you choose to join us on this Grand Tour?  Prepare yourself for all of the scary stats!

* Stage 3 cut short due to a virtual landslide. The race director (Daniel) and the head of the race jury (me) took the unprecedented decision to take the GC times from the 31.5 km mark to make sure that those early riders who were unable to finish the stage still tick off the stage.

Note: The next set of stages will be released on the rest day. As with all Grant Tours, expect the worst in the 3rd week!

The code for the “Our Giro” leaderboard is exactly the same as that used for the 100 Greatest Climbs and Zwift Insider leaderboards and is designed more as a tick-list of climbs/routes/stages than a traditional GC. With those other leaderboards, the segments can be ticked off in any order and most people will never complete them all so the idea of a total time like a classic GC isn’t suitable.

So the way the scoring works is in two parts for each segment/stage:

Then add then all up.

Because a total time (for those that have completed all stages to date) does make sense for “Our Giro” I have added that in as a separate column but because not everyone will have the time to compete every stage, the GC overall time won’t be used for the overall scores and placings, purely as an extra bit of data for those that are interested.

As with all cycling, a route is often as hard as you make it.  The 8.4 km of stage 1 is the shortest of the entire Giro but if you are looking to set a good time it might be one of the most painful! Perhaps a steady group ride to properly recon the stage followed immediately by a hot-lap to try and make your mark on the GC?

The elevation and distance of stages 6 and 9 look very similar but the VVOM (VeloViewer Objective Measure) exposes the hideousness hidden by those simple stats.

Stage 6 contains the first HC climb finishing high on Scilly’s Mount Etna but apart from a ramp near the finish, the climbing is quite steady:

But the vicious slopes to Rifugio Calvanico on stage 9 will get you reaching for the trainer difficulty setting and longing for the first rest day to arrive:

Well that was a tough end to the first week and I’m sure everyone will be glad for the rest day!  But don’t relax too much as stage 10 is a mountain time trial and will include the next KOM for the mountains competition. Note that RGT doesn’t support an ITT mode so completing the stage in a race is perfectly acceptable.

Two much easier stages follow giving a chance for those not going for the GC to spin the legs out without any big climbs. Stage 13 sees the RGT route get a bit more spicy with two sharp climbs and a rise to the finish with both climbs featuring in the KOM leaderboard.

But make sure you save something in the legs as Race Director Daniel Friebe has added a double sting in the tail of this second week of Our Giro. First up on stage 14 is the hideous looking Bocca di Forca:

Followed on stage 15 by the slightly less tough (but still 14 km long) climb of Passo Fedaia:

The final week, and what better way to get it started than with an ascent of the dreaded Mortirolo! As a concelation, more than half of the stage is descending.

Stage 17 sees another major climb with the much steadier ascent of Selvino:

Stage 18 is a rolling route with just over 900 m of climbing over lots of shorter climbs and is the longest stage of the race at 47.8 km. This is followed by a big descending/flat stage 19 with a kicker close to the finish through the streets Pinerolo.

Stage 20 is the final day in the mountains tackling 2 huge climbs with 1750 m of climbing in total:

A final, flat time trial into Milan draws OurGiro to a close.