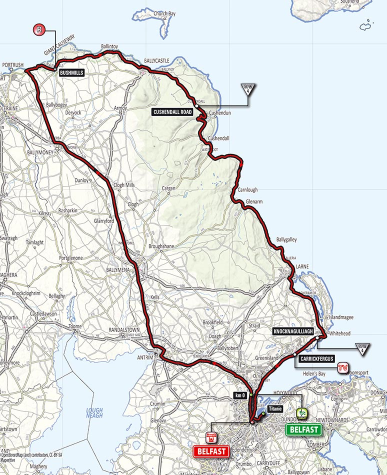 The UK and Ireland are in for a real treat this year for cycling fans with the two most iconic races of the calendar hosting their first stages on our shores. The perhaps better known Tour de France is starting in Yorkshire this July (see the climbs of stage 1 and stage 2 parts one and two!) but the arguably more glamorous and exciting Grand Tour will be travelling around the beautiful countryside of Northern Ireland and down to Dublin.  The first stage is a 22km team time trial where each 9-man squad will attempt to make a choreographed blur of carbon and lycra through the streets of Belfast with the time being taken on the 5th rider across the line, but as always, it’s the hills which interest me the most as it is the key aspect of professional cycling that is open for all of us to easily try for ourselves on the roads used by the professionals themselves.

Having passed the famous Giant’s Causeway the peloton will head along the coast before cutting back inland and over this first categorised climb.  The full climb starts at sea level at the edge of Ballycastle and in just under 12 km reaches the true summit at around 261 metres. The 2.2% average grade is a little misleading due to a short descent a quarter of the way into the climb but even so, this isn’t a climb that is going to trouble any professional road cyclist and the sprinters’ teams will be sure to keep their fast-men (the sprinters) up to the front and out of any trouble.

(Interactive 3D profile of climb and map – don’t be shy, give it a spin!)

After travelling down the remarkably photogenic coastline the riders will reach the second climb of the day. With just over 20 km left in this first bunch stage this climb might be just enough to provide a launch pad for some aspiring stage winners looking to steal the glory from the sprinters teams.  They will have their work cut out for them and there is a good chance that the days break will still be off the front with the sprinters’ teams timing their catch for the run in back into Belfast.

The climb itself is only just over 2.5 km in length and rises by an average grade of around 2% up to the 78 metre high point. Unlikely to make a real mark on the race itself but its position on the coast will certainly make for some more spectacular helicopter shots.

There is a good chance that the stage 1 team time trial will result in bigger time gaps for the main GC (General Classification) contenders than these first road stages but that is usually the plan with Grand Tours. These are the stages for the sprinters before the route takes the riders into the larger hills and mountains of Italy, but watching the full, 200 man peloton come past from the roadside is something not to be missed so if you’re able to get to the course then make sure you do.

Here is a great video from Discover Northern Ireland that is definitely worth a watch summarising the 2nd stage: