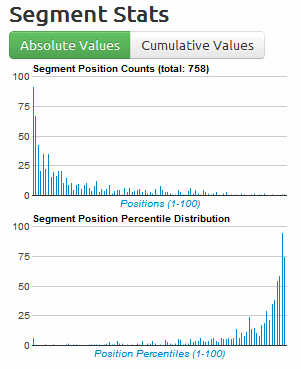 Your leaderboard positions on Strava segments can be a bit of a badge of honour but the significance of each of those positions can vary wildly. If you are 6th placed out of 3000 riders then that is pretty good going but 1st place out of just 2 riders is less so. In steps an suggestion from a forum to include a position percentile column and corresponding graphs, a few minutes later and the first incarnation of the position percentile appeared.

Based on my fairly basic experience with stats and percentiles in particular (baby sizing), the bigger the number the higher the percentile, so that is what I went with and people were immediately comparing their best values with each other. However I have recently been educated in how percentiles should be used (think of it like exam grades, you are in the top percentiles the better you perform) so I tweaked it round to work the other way so now the higher the value the better.

One of the potentially confusing results in doing this is the graphs relating to this value have now been switched round which I’m not too sure about just from a consistency point of view. When dealing with absolute positions then it’s obvious that the first column is your number of 1st places which puts the priority on the left hand side of the graph, so it would probably be best to keep that same target distribution curve for this data as well to ensure the majority of users understand what is a good distribution to aim for.

A comment I’ve had a couple of times since reversing the value of this column has been that their 1st of 1 segment positions are showing up with a value of 0% rather than 100%. Once again I’d have to leave it to a stats expert to educate me as to what that should be from a technical perspective seeing as the rider is in first place, but is also in last place!

My viewpoint is that this column should show the value of each of your PR’s in terms of position on the leaderboard and so a 1st of 1 is actually of no value at all and so should show 0.

So, the easiest solution I can see is to ditch the term “percentile” from this column and replace it with something like “Position Score” with the higher the value the better. It will remain to be calculated as it is now (100 * ([number of riders] – [position]) / [number of riders]). This will make it simpler for more people to understand, especially if they know it is between 0 and 100. It should also remove the confusion for the real statisticians out there. I’ll also remove the % as well and just provide am “out of 100” type description.

I’ll spin the graph round so the bigger your values on the left of the graph the better to be consistent with the positions.

Having a “higher the better” score for these values also allows us to sum them up to give some more interesting stats. What I can now do is add a column to the rides list which sums up the scores of PR’s for each ride to provide a potentially better ride “score” than just the count of positions as it currently does. Trying to maintain a value for your non-PR’s would be far too labour intensive in terms of getting data from Strava so I won’t even think about trying that.

On the summary page I could also add some best segment position scores for each climb category or over different distances/speeds etc.

What do people reckon?

Following further comments from users the equation used to generate this score has been tweaked again to become:

The adding of the 1 above the divide means that if you are right at the top of a leaderboard (most obvious if KOM/QOM) then the score will still reflect the number of athletes on the segment – so if you are 1st of 10 you score less than being 1st of 1000.

The adding of the 1 below the divide means that if you are right at the bottom of the leaderboard then the score will once again be reflected by the number of athletes. Being last of 10 scores higher than being last of 1000.

Your top 100 Position Scores (or top 25% of Scores if < 400 segments) of segments with a grade >= 0% are averaged to provide your VeloViewer Score.